I have a couple of my sons visiting and thought to show them the downtown area last Sunday by visiting the Lilac Festival.  Big mistake.  This is a one day festival along 4th Street.  Nice are and it was a beautiful day.  The street is closed off and there are vendor along both sides with stages for musicians at the side streets.  Lots to see and do. But there was almost no way to see or do anything.  There were far too many people for the amount of space. I have worked at various kinds of trade shows for years and I’m pretty sure I would not have liked it as a vendor either.  We walked along the center of the street for about 25-20 minutes.  We were basically herded along.  There was pretty much no way to stop and look at things because of the mass of people behind us pushing along.  None of were really enjoying this so we walked along 17th until we found a place to sit, have a beer and people watch.

I don’t know if this quantity of people is usual but from talking to others who have been before I think it is.  My suggestion to the promoters of the event and the City of Calgary is to extend this festival by either space or time or both. Extend it along 17th or make it a two day show.  Something. 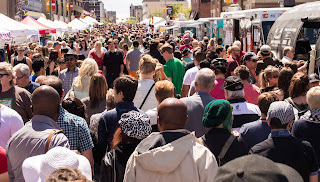