A friend asked me to write this(sort of).  We don’t hike as much as we would like and time would allow but we get out as often as we can.  All of our hikes are ‘day’ hikes.  Generally, a few hours.  And most within a couple of hours or so from Calgary.  It is nice being near some of the most spectacular hiking areas in the world. Hiking 101 basics will be the same for anywhere but there are certain points that will vary depending on where in the world you are, type of climate, terrain, etc.

I will add to this later but this is good for now. If you have something you deem important enough to put on here, please email me.
Here is a pic of me atop Smith Rock in Oregon:This was before ‘selfies’ – I had to get someone else to shoot this. 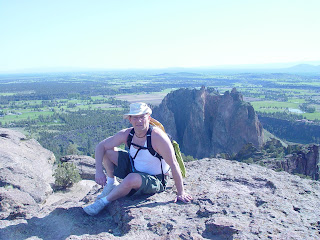