A Personal Plug for a Great Product

This is a post that just happens to be plug for a product that I sell.  I sell it at trade shows(Home Shows, Women Shows, some fairs, like the Calgary Stampede, etc) and online.

This cream – it is called Thentix – ‘A Touch of Honey’ – really is wonderful.  I gave a small jar to my buddy Len a few weeks ago.  He has some eczema on the palms of his hands which developed about 5 years ago.  I told him to put it on three or four times a day for 2-3 weeks.  I saw him after three days and it was cleared up by at least fifty percent.  Another recent story is the lady at the Post Office.  She serves me when I ship out the Thentix.  She recently went through chemo for cancer.  She had asked me about what I was sending and what it was for.  I brought her a small jar to try for the itchy skin from the treatments.  I saw her about a week later.  She exclaimed that it was amazing.  She said she could put it on early in the day and bathe later and her skin was still silky.  I was thrilled that it worked for her.    (I expected that it would but it is always wonderful to hear stories like this.)

Thentix skin cream was made for more serious skin conditions but is great for something as simple as a mosquito bit itch. I use for shaving.  You really don’t have to but if you want to find out more, I have tons of information on the product here:

“Thentix: ‘A Touch of Honey’

If you are at a trade show in Alberta(I’m at a lot of them), see if it is me – I work the Calgary Stampede every year as well.  Come by and say ‘hello’.  Anywhere else in Canada or the USA, try a little out.  I’m sure that you will like.  Mostly natural.  No smelly stuff and no petroleum products.

Thanks for listening.
– Martin 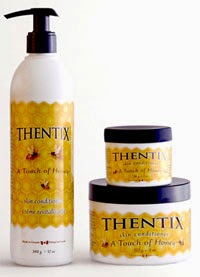