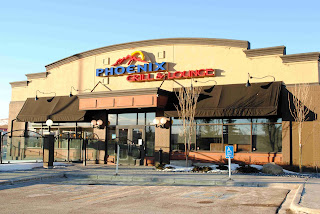 The Phoenix Grill we love for the food and the service.  We have been several times.  The first time we went we had a small pizza and a couple of glasses of wine.  We thought the pizza was delicious – I honestly was very pleasantly surprised.  And the service was very perfect.

Because of this we went back a few weeks later and:  Dinner was excellent again but – the service!!  I ordered an Alexander’s Dark – I’m partial to darks.  I liked it so I ordered a second. It was a bit coming, well, maybe a bit more than a bit and then we found out they were out so the manager came to the table asking if I’d like to try a different brand which he recommended.  He came back a minute later and poured it for me.  It also was quite good.

Even though I had to wait a bit for that second beer the overall experience and attention was pleasant.  And… they did not charge me for the second beer.  I am rarely one to complain at a restaurant.  I believe people are generally trying to do their best but things to happen.  I’ve waited on tables in my time and occasionally messed  up an order or was slow but the majority of the time did a good job.  So, I tend to not complain.  So, it was really nice to have them give me the complimentary drink without me even having said anything. I certainly was not expecting it.

We have been back since and I mentioned to one of the managers how we liked it there and he sat with us and chatted for a minute.  He was genuinely pleased to hear this.  I find the service there pleasant – they make sure that you are taken care of without ‘interrupting’ you all the time.  I never felt that I was waiting for service but at the same time didn’t feel like my privacy was being invaded.

And again the food, each time we have eaten there, has been excellent.