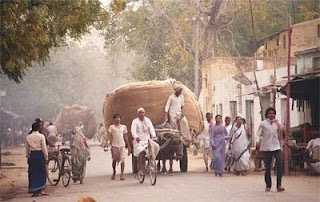 This afternoon I was having a double Expresso in Pangea on Fort Harrison in Clearwater Florida while speaking to Geri, one of the owners. I struck up a conversation with another patron. She mentioned that she’d spent most of her adult life in India. Well, my father lived in India for 30+ years, so I asked her where she’d been. She told me that she’d lived in Vrindavan – the exact same town where my father had lived. Not only that she had visited the hospital where my father had worked. My father Doctor Glyn Jones, was a doctor at that hospital and a member of the Vedanta – a Hindu sect. I had been to Vridavan 20 years ago and it was wonderful hearing about it again from someone who had lived there more recently. Also, interesting were some of the changes occurring within India. She plans on writing a book – hopefully, she does so – I’ll certainly read it. Here you can see a picture that I took – this was just outside the gates of the hospital.