Booked a concert to go see in Ithaca, New York this for this past weekend.  A finger picking guitar legend named Leo Kottke.  He played at the Hangar Theatre last Saturday night.

As my wife and I are avid hikers we thought it would be good to see some of the sights while we were in the area.  I did some research before leaving on the trip and found that there are an amazing numer of spectacular waterfalls in the area of Ithaca and Watkins Glen.  All around the Finger Lakes area.

On our way in to Ithaca, along the west side of Cayuga Lake, we stopped at Taughannock State Park.  We first drove up to the top overlook to see the falls from there – tall!  Then drove around the hiked in from the parking lot.  More of a walk than a hike really. Only took 10 minutes.  One of the highest drops of a waterfall east of the Rockies apparently at 215 feet.

From there we checked in to our AirBnB in town and got some dinner.  After that we hiked Buttermilk Falls.  We started at the top and hiked down to almost the park at the bottom then back up(obviously).  We take a lot of photos so going the first direction takes us about 3 times as long as coming back.  We were there on the Friday evening, a little while before dusk, which makes for much better light than the middle of the day.  I liked this one as there weren’t too many people as opposed to Watkins Glen – that was packed.

I didn’t have much choice of the weekend I wanted to go because of the concert but going again I would not choose the graduation weekend.  So many parents hiking about with their graduates.

Saturday was spent see a bit of the town, Ithaca Farmers Market in the morning where I was able to get my second breakfast of this delicious breakfast samosa.  We went to Robert Treman State Park but the gorge trail was close due to all the rain so we ended up doing a short walk about there.  Couldn’t really see much of the falls.  We circled around and were able to see a bit more at the base but not much walking about.  We went through the university and circled around Bebee Lake. Very Spring like with the students out on the lake in their canoes. If you make that walk around the lake, be sure to go up the short spur just past the bridge along the river and you can see a nice waterfall or two.

It was too early for much in the way of flowers in their botanical gardens.

On Sunday, Watkins Glen, even with the crowds, was amazing.  I have not yet done any research on what went into the construction of the walkways and bridges etc but they were masterful.  You are climbing a lot of stair but this is completely worth the effort.  If you are debating whether to take the rim trail back instead, it is not hard at all and should take you about a quarter of the time to get to the parking lot at the entrance on S Pavilion Road.

Below are just a few of the photos. 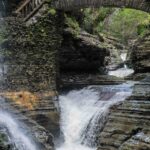 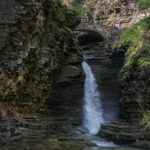 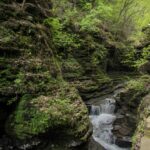 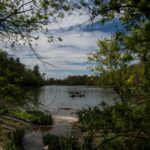 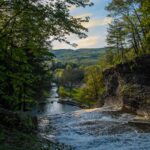