A Comment on me Mum – Mrs Jeannette A Jones

This is kind of a short tribute to my mother, Mrs Jeannette Amarens Jones.  (Nee: Van Rantwyck)

Mom had a couple of things that she said when we, as kids were young that really stuck with me and I think made me a better person.

The first was when we were smaller and something bad happened: we got hurt, fell or something or other, she would say ‘Blame Jim’ (some friend or other) or someone or something that was no where near and a bit ridiculous.  The result of this was making us take responsibility for what happened.  It was a bit weird but blaming others for one’s situation is never a solution so this was a kind of gentle way of creating that perspective.

My mother remarried and moved from Canada to Denmark around 1978/79.  She had been a pen-pal with a fellow in Denmark since grade school.   She grew up in Holland.  I think they had been writing each other for almost 40 years.  His wife had passed away and she was long since separated and divorced.   Several years later, her husband Niels, told me that she would receive three to five personal letters PER DAY in the mail.  From friends.  She wrote letters every evening when we were growing up.

Her communication lines were amazing.  Here view on this was:

Never wait for someone to communicate to you.

She thought that if you wait for other people you will be waiting forever. This is a great philosophy.  Many people would be a lot less lonely and upset following this.

Here is a picture of me and my mother around Christmas 1951: 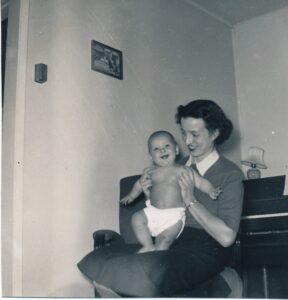